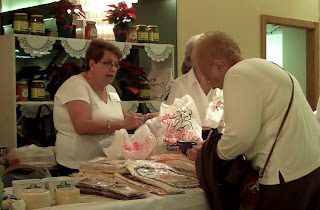 The 3-day food festival at St. David Armenian Church in Boca Raton, Florida is over for another year. If you didn’t get there, you missed a good time, although it wasn’t as crowded as I expected.

Perhaps the dreadful weather forecast kept people away. My husband, mother & I went on Saturday afternoon since the weather wasn’t as bad as predicted.

As we entered the Church lobby, we were greeted by long-time friend Ara Kazarian, who was manning the jewelry booth of Melanie Mikaelian. She makes such beautiful things! Once inside, you were drawn by the sight of table-after-table of “to-go” foods.

Ala carte items included spinach & cheese boregs, yalanchi, assorted desserts - paklava, boorma, and rice pudding to name a few. They served soda, beer, American coffee, and a yogurt drink. If you wanted Armenian coffee, there was a separate set-up, so you could have your fortune told as well. (That’s always a big hit!)

Armenian music was playing softly in the background, while people ate and chatted. Naturally, as soon as I stepped out of the hall for a few minutes, the teenage girls did an Armenian dance routine to the music. Oh well, I missed it!

Sunday, after church - the last leg of the festival.

Local residents tried walking into the festival before church was over - a BIG no-no! The improved weather drew a larger crowd than the afternoon before which made for a nice finale.

A drawback to coming to the festival on the last day is that they always run out of the one thing you really want; for me it was the yalanchi. ALL GONE! What a disappointment! On the other hand, one of the perks of being there at the end, is that they drastically reduce the price of all kinds of things. So, we walked out with an arm-load of goodies.

Well, folks, if you didn’t get to any of the Armenian Food Festivals around the country this year, start looking for them as they start popping-up again. Different regions have them at different times of the year, so there might be one coming up in your area soon.

To get your appetite working in the meantime, here's a brief video taste of St. David's festival.