Eating in Aleppo: We can only imagine 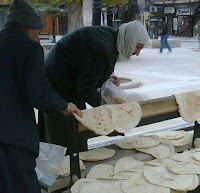 We have no first-hand knowledge, but Doug's cousin Arsene Dirkelessian told us it is -- and we certainly know better than to argue with Arsene.

Arsene lives in France but he was born in Aleppo and goes back each year to visit family and friends in the city's large and historic Armenian community.

When we visited Arsene at his home outside Paris, he insisted we eat various sweets and preserved delicacies he'd brought from Syria, even after we'd stuffed ourselves on fresh, local foods prepared by his wife, who is one very talented cook.

"This is better, better," he'd insist, as he piled our plates higher. "Alep food is the best."

Sometime after our trip to France, I bumped into Father Carnig Hallajian, a Der Hayr I grew up with. Our conversations almost always turned to food. He confirmed that, indeed, the food in Alep was quite delicious.

I'd filed all this away in my memory bank until just recently. Imagine my reaction when this story from National Public Radio popped up on my Google page the other day: Food Lovers Discover The Joys Of Aleppo.

The story reported that Aleppo has become a culinary destination rivaling the great food cities of Europe.

It also noted: "The International Academy of Gastronomy in France awarded Aleppo its culinary prize in 2007. But Aleppo was a food capital long before Paris. Aleppo's diverse communities — Arabs, Kurds, Armenians, Circassians, a sizable Christian population — all contributed food traditions..."

I could hear Arsene’s voice in his Armenian-French-Arabic accent as though he were standing right beside me: Alep food is the best!

Aleppo still isn't on our top-10 list of most likely vacation spots, but we sure won't argue if Arsene wants to send us a bundle of goodies during his next visit there -- strictly as a matter of professional research, of course.