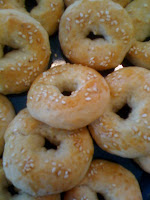 In early January, I offered an Armenian cookie recipe to reader Adriana, who had lost all of her recipes about 30 years ago. She said she’d try making it, then let me know if this is what she remembered.

While waiting to hear back from her, another reader, Shushan, e-mailed me a cookie recipe she’d discovered. It’s called "Kahke with Yanesoun" (Anise Seed Circles with Sesame) which she found in a cookbook called Tasty Armenian Dishes, published by the ladies of the First Evangelical Church of Montreal. This recipe uses lukewarm milk in the dough, and is brushed with an egg-milk wash, then sprinkled with sesame seeds.

So, I rolled up my sleeves, and began the task of baking yet another batch of cookies. (No one in my family seemed to mind, especially since they would become my official taste-testers!) I made a few changes along the way. See what I did differently at the end of the recipe, and read the evaluation from the "Tasting Team".

Thanks, Shushan, for this submission.

Adriana, here’s another recipe for you to consider.

Directions:
1. Prepare yeast as directed on package, using the 1 cup of lukewarm milk instead of water mentioned on package.
2. Meantime, sift flour, sugar, and salt. Add anise seed.
3. Rub in fats until mixture resembles bread crumbs.
4. Make a hole in the center of flour and pour in dissolved yeast; blend well and mix into a soft dough.
5. Cover and let stand 1 hour until double in size.
6. Punch down dough, cut off small pieces, size of a walnut.
7. Roll into 4 to 5 inch long strips; shape into a circle by bringing two ends together; press down (to keep edges from separating during baking).
8. Arrange on baking sheets ½ inch apart, brush with beaten egg mixture - 1 egg and 1 Tbsp. milk beaten together.
9. Sprinkle with, or dip into sesame seeds.
10. Bake in 350 F oven for 25 minutes or until lightly golden. Makes 5 to 6 dozen.

The Armenian Kitchen variation of this recipe:
1. 1 cup of unsalted butter was used instead of shortening/margarine combination.
2. I used a technique called "cutting-in" to combine butter with flour mixture, using a pastry blender. Fingers work well, as do 2 forks or 2 knives, pulling in opposite directions to break down the fat into little pieces.
3. Whole anise seeds were ground before using.
4. Dough rose for 2 hours instead of one.
5. There’s no need to grease baking sheet.
6. I toasted the sesame seeds in a dry skillet before sprinkling on the cookies.
7. Make any shape you like. I started with the circles, then finished off with "S" shapes.
8. Cookies baked nicely in 20 minutes, but each oven is different, so check.

Tasting Team Evaluation: The final result was a soft, light, sweet product which reminded us more of a sweet chorag rather than a cookie. These tasty morsels paired well with a mild cheese and strong coffee.
Posted by Robyn at 12:05:00 AM