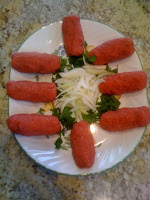 
Some call it hoom kufteh, some call it chi kufteh, while others call if keyma. Armenians used to describe it to odars (non-Armenians) as "Armenian steak tartare" -- but these days, who knows steak tartare?


No matter what you call it, it's raw meat with raw bulgur and raw onions. Anything more raw than this would cry when you bit into it.


In the Old Country, it was made with lamb. We use beef for the simple reason that we can get fresher beef -- and you definitely want to use the freshest meat possible.


CAUTION! We've read a lot lately about the dangers of raw and under-cooked meat, and many of those stories have involved ground beef. If you're skittish or have health reasons to be extra cautious, just cook your kufteh until it's well done!

If you're more daring -- but, like us, only a little more daring -- you can significantly decrease your risk by avoiding store-ground beef. Get your meat from a butcher you trust, and tell him you're planning to eat it raw. Buy it whole and grind it yourself at home, so you won't have to worry about what went through the grinder last.

We like to use London Broil. Whatever cut you choose, make sure it's as lean as possble and trim off any fat, veins or chewy bits. Run it through the grinder three times -- or, if you're using a food processor, make sure it's ground very fine.

The other main ingredient is #1 bulgur, or the smallest variety you can find , soaked until soft.
Basically, that's it -- although there are plenty of variations on the basic theme. Some Armenians spice it up more than others. Some add onion and even chopped peppers to the mixture. Others (including us) serve chopped onions and parsley on the side. 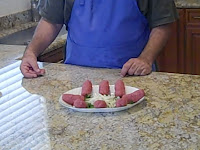 One thing to keep in mind is that today's fresh meat is tomorrow's not-so-fresh meat, so it's best to make no more than you can eat in one day. The good news: leftovers make great burgers! Or, fry them up with eggs for a special Armenian breakfast.


Here are two recipes, ours and another contributed by reader Tom Merjanian.
Hoom Kufteh (Chi Kufteh)
Ingredients (serves four)
1 pound very lean, raw London Broil
1/2 cup #1 bulgur
salt
ground black pepper
ground red pepper
coriander
1 medium yellow onion or several stalks green onion
1 bunch parsley
Directions
Chop the onion and remove stems from parsley
Add 1/2 cup water to the bulgur and let it soak while you're preparing the rest
Trim the meat of all fat and veins
Grind the meat three times, or until very fine
Add the softened bulgur to the meat in a mixing bowl
Add 1 teaspoon ground coriander, plus salt and pepper to taste
Knead thoroughly
Shape like lule kebab (or like a sausage)
Serve immediately with the onion and parsley on the side
These make great roll-up sandwiches when wrapped with the parsley and onions in soft lavash bread!

Preparation:
1.  London Broil is a good cut of beef for Chee Kufteh for its color and flavor. Remove veins from the meat as best as possible. Cube the meat.
2. Cut the onion into squares suitable for processing.
3. Defrost the red pepper and remove the skin and seeds. Cut into squares for the food processor. Always keep some red peppers frozen for this use.
4. Separate the meat into portions that will be able to be finely grind in your food processor. Divide the sweet red pepper and onions to match these batches. Process the meat until it has the consistency of "chewing gum"- that is to say "smooth," while adding salt to taste to each batch.
5. Put the processed meat, onion, and red pepper in a bowl, blend together and then measure into measuring cups.

Kneading:
Have a bowl of water for moistening your hands. Your hands must be free of any odor including soaps that are odoriferous.
1. Take 1 to 2 teaspoons of Aleppo ground red pepper and place in approximately 2 ounces of water to allow the flavor to disperse.
2. Place the meat mixture into a large enough bowl for kneading. For each cup of meat, add 3/4 cup of #1 finely ground wheat germ. Add the hot pepper. Keep your hands moist. Add the 1/3 cup of water. Knead until blended well and add more water to complete the texture, making sure not to add so much water that the mixture becomes gooey. Keep in mind that the cut London Broil and the amount of onions and red pepper may affect the need for you to be sensitive by touch to the texture of the mixture.

Serve
Spread on a platter, oval or rectangular. Smooth surface with moist hands. Impress the sign of the cross into the middle of the Chee Kufteh, just as you would for dough. Garnish with the chopped scallions and chopped parsley. Additional scallions and parsley may be needed or can be served on the side.

Zahleh, Lebanon style: Your guests can pour olive oil on top of their Chee Kufteh.

Some people roll their Chee Kufteh in bread:
1. Aleppo style - "Toneer Hatz"- paper thin bread cooked on a half dome.
2. Gesaratzi style - softened "Dan Hatz"- the hard, thin bread that is softened by sprinkling with water and then rolling in a towel to allow the water to permeate the entire loaf of flat, hard bread.
3. Arabic style - so-called "pita" which is the easy way out

In the old days, the women would gather and work the meat into a fine pate working with a stone slab and a stone to grind the meat and break down the sinew. What a labor of love!
Posted by Douglas Kalajian at 12:05:00 AM