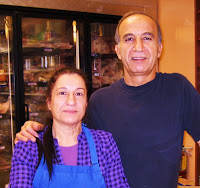 It wasn't so very long ago that we struggled to find the most basic Armenian ingredients such as bulgur here in South Florida -- and despite the region's growth, we're still left with few shopping choices.

So we get a little excited whenever we hear about a new Middle Eastern store. But that excitement often fades when we walk through the door.

A number have come and gone over the years. Many were small and poorly stocked, and a few have been less than appetizing in their appearance and not very hospitable.

So what a pleasant surprise it was when we visited the just-opened Falafel Gourmet in Coral Springs (not far from Fort Lauderdale) and were greeted warmly by Hamest Guiragousian, a fellow Armenian, and her husband Mohammed Flafil.

The store is bright, clean and impressively stocked with a vast selection of dried, canned and packaged goods, refrigerated cheeses, yogurt, frozen meats (including lamb!), sweets from Syria and other countries that will knock your socks off.

Ms. Guiragosian cooks many of the fresh foods along with a team of cooks, right on the premises. They have a take-out menu which includes appetizers, savory pies, salads, kabob plates which come with rice and salad, and sandwiches (falafel and kabobs), chicken or lamb shawerma, makanek (a beef and lamb sausage), and more.

South Florida's diversity -- and growing Near and Middle Eastern population -- is illustrated by the variety of languages and country-of-origin tags, as well as labels marked Halal and Kosher.

Part of the reason the store is so attractive is the gorgeous wood cabinetry that looks hand-made because it is: Mr. Flafil was a custom cabinet maker in his native Jordan. 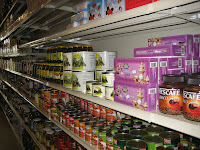 The couple got started in the food industry by running a wholesale business for 15 years from home -- something they enjoyed doing very much. Their dream of someday having their own store became a reality on December 10, 2009, when the Falafel Gourmet opened.

They hope to expand to include a restaurant. But for now their focus is on their store, with help from their their two high school-age sons whenever school is out of session.

I found them by word of mouth, and now I’d like to spread the word.