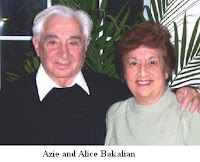 Lucine Kasbarian’s father, CK Garabed, is searching for Siserov Kufteh, a Dikranagerdtsi recipe, which is served primarily during Lent.
He stated, “Most Armenians make Topig, which calls for a filling. However, Siserov Kufteh requires no filling. Basically, it involves boiling ground chick peas in water, and forming into tennis-sized balls. When cooked and cooled, the balls are crumbled into a spinach-rice soup. In addition, the balls, when cooled may be sliced and fried in olive oil...”

CK, here is a recipe for Seesere Kufta, sent to me by Alice (Doramajian) Bakalian. It was her mother, Baidzar’s recipe.

Alice wrote this in a most amusing way; I hope you’ll enjoy reading it as much as I did! A second recipe from Alice follows this one.

PS: Cut about 2 pounds of onions, very fine. Cook until quite brown in oil. Mince garlic into some water and let it soak for a while. These can be added to each individual dish, if they are so inclined, of course.


#2: Seeserov Kufta with Parsley and Scallions
Instead of placing the kufta (chick pea) balls in the spinach, they can be prepared as follows:
Chop scallions and parsley; mix well into the ground seesere along with some flour, dried mint, ground coriander, salt and red pepper. Form into flat patties. Fry in olive oil until done.