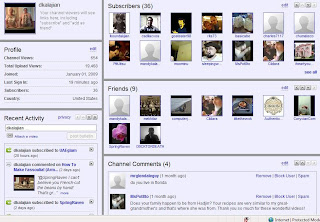 We continue to be amazed at the popularity of YouTube in general, and at the response to our own videos in particular.

Our surprise is partly a generational thing: When we grew up, the only video in our homes was black and white and had an antenna on top.

Who'd have believed regular people like us could make moving pictures that the whole world could tune in?

Our first eight videos have drawn a total of nearly 20,000 views so far. The most popular is "How To Make Armenian Coffee," with more than 3,500 views. "Robyn's How To Make Chorag" is just a handful of views behind in second place.

The comments are as interesting to us as the numbers. Many come from names we haven't seen in the comments and emails we get through this Web site, so it's clear that the videos are bringing us a new and expanded audience.

Here are a few of the best YouTube comments so far.

SpringRaven offered a wonderful anecdote about her mother in response to "How To Make Fassoulia," Armenian green-bean stew. "Your version looks wonderfully quick/easy. I was taught the 'purist' version, neck bones and all, then she'd have me painstakingly french cut the green beans -- it took FOREVER."

Wow! What a great memory.

PittJitsu waxed enthusiastic in response to "How To Make Chi Kufteh," raw meat mixed with bulgur and seasonings.

"I have tried pulling into the Armenian store, buying the ingredients and then making this in the car! Now that's how an Armenian foodie's addiction is fed."

But he didn't stop there.

"I tried doing this with lamb, and by hand using two knives to chop it. WHEW! Man did grandma have strong arms!"

Pitt's grandma must have come from the same village as mine, but Red ChileDog added another dimension to our chif kufteh lore.

"In the old country, they didn't use knives to pulverize the meat. Rather, they pounded it with a heavy wooden mallet on stone until it was essentially mush...This is from my boyfriend, who used to watch his grandmother do it in an Armenian village in Lebanon."

THIS is what we cherish: Priceless memories, and techniques you won't find in cookbooks.