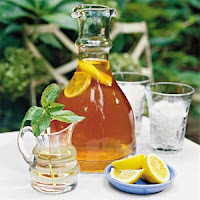 It’s heating up again outside in the sunny south and our thirst level is on the rise. There’s no better way to quench our thirst than to sip a tall, icy glass of iced tea (“chai” as Nanny would say). In the deep south you’ll get sweetened tea unless you specify unsweetened, so be careful what you order.

In our home - and on the road, we prefer unsweetened tea.

You don’t even need tea leaves to make iced tea. All you need, really, is cold water, fresh, aromatic herbal plants, some spices to jazz things up, and sweetener, if desired. If you grow your own herbs, that’s great. We don’t have a traditional garden, just containers on our patio filled with a variety of herbal plants, such as mint, basil, and lemon grass.

1. Place the water in a large pot. Tie the cinnamon sticks and cloves in cheesecloth; place in the water. Bring to a boil; simmer about 10 minutes.
2. Remove pot from heat; remove the cheesecloth with the cinnamon sticks and cloves, and discard.
3. Add tea bags to pot, if using, and allow to steep about 5 minutes. Discard tea bags. Add desired amount of sweetener, if using; stir until sweetener is dissolved.
4. Refrigerate until ready to serve.
5. To serve, pour in tall glasses filled with ice.

For minty iced tea, follow the same instructions as above, EXCEPT: add about 1 cup of fresh mint leaves, slightly crushed to release their flavor, or two tablespoons of dried mint (tied in cheesecloth) to the boiling water, and eliminate the cinnamon and cloves. Remove tea bags, and strain mint leaves before adding sweetener. Sweeten as desired. Serve with ice.
Posted by Robyn at 12:05:00 AM