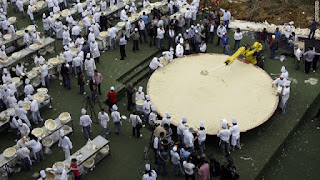 Have you heard about the Hummus War? It's sort of funny, but it's no joke.

CNN reports that Lebanon has asked the European Union to declare hummus a Lebanese dish, in the way feta cheese has been certified as Greek.

Anyone can make and sell feta cheese, but the label must say "Greek style cheese" if it's not actually from Greece. If Lebanon succeeds, hummus will have to carry a similar Lebanon-origin label.

In order to dramatize their claim, a group of Lebanese chefs recently set the Guiness World Record for the largest plate of hummus ever made (see photo at top).

Who wouldn't marvel at such an achievement? The Israelis, who aren't ready to concede their share of the worldwide billion-dollar hummus market.

The Lebanese say Israel is poaching (or maybe just boiling) their chickpea territory. Israel makes no claim that hummus is of Israeli origin but says hummus is a regional dish that no country can claim as its own.

We hear plenty from readers (and especially YouTube viewers) who are certain that this dish or that either definitely is or isn't Armenian. It's not enough to say that Armenians enjoy certain foods or traditionally prepare them a certain way. Some people just can't enjoy a meal without knowing, or at least believing, that Armenians were the first to cook lamb on a skewer or wrap rice in a grape leaf.

Of course, we were.

So why doesn't Armenia register something? Yogurt (madzoon) would certainly be profitable. How about lavash bread? A slice of the worldwide sandwich-wrap market would be mighty satisfying!

What do you think? What should we Armenians insist the world recognize as our own?
Posted by Douglas Kalajian at 12:05:00 AM