Maque Choux: Why does it taste Armenian? 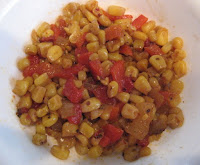 I'm just the assistant around here, so I hope I can be excused for being clueless from time to time.

For example: I never heard of maque choux (sounds like mock shoe) until just recently. As you might guess, I heard about it from my wife. Actually, I heard her ordering it at a barbeque joint in South Carolina, of all places.

For those as un-hip to food trends as I am, maque choux is a spicy corn dish that hails from the Cajun corner of Louisiana. The basic mix is corn, onion, green bell pepper and Cajun seasonings. Some recipes add cream or pork fat, meat and other ingredients. Really, the variations are endless.

My first taste had me hooked. Too bad it's so obscure, I thought -- but, sure enough, it has since shown up on just about every menu I've opened since then. Apparently, I was the last to know!

On a whim, I decided to try my own variation the other day. I started by sautéing diced onion and red bell pepper, adding a heaping portion of Allepo pepper flakes. I skipped the cream in favor of a modest pat of butter. The result was rich tasting without being heavy, and the sweetness of the corn played nicely against the heat of the pepper flakes.

Robyn's verdict: "This is so good it tastes Armenian."

Why shouldn't it? Corn isn't a big part of the Armenian diet -- it isn't really a mountain crop -- but the other ingredients definitely are. We're going to do some further experiments, maybe with a dash of coriander.

Meanwhile, I'll take Robyn's opinion as a high compliment. I can't wait to hear what she orders next.

Cook the onion and diced pepper in butter or olive oil until soft.
Add the corn and stir.
Add the red pepper flakes.
Add salt to taste.
Stir in a tablespoon of butter just before serving.
Posted by Douglas Kalajian at 12:05:00 AM