Learning to live in a world of food without common scents 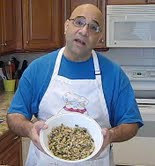 As a boy, I could always tell I was in an Armenian home even with my eyes closed because I could smell the onions.

Onions simmering in a pot. Onions sliced thin and spread across a serving plate. Onions hanging in a basket next to the stove, with green shoots bursting through brown, papery skins.

It's one of my favorite memories, and now that's all it is.

Learning new words has always been fun for me, but not "anosmia," the loss of any sense of smell. I got a rather rude introduction to this condition recently when I took a fall and landed hard on my head. I haven't been able to smell a thing since.

Not coffee brewing. Not cookies baking. Not even garbage overdue for the curb.

I never really thought about what this would be like because I never thought about it at all. It just never seemed likely, even though I'd been smell-deprived from time to time like everyone else. We all experience colds, and some of us are prone to allergies and sinus attacks that seriously diminish our olfactory sensations while they last.

But this problem won't go away in a few days.  The docs say it's most likely permanent, and that means I have some serious adjustments to make.

My biggest disappointment came from learning first-hand just how close smell and taste really are.

Turns out, there are certain basic flavors -- sort of like primary colors -- that go directly to the taste buds: salty, sweet, sour, bitter. Beyond those, however, much of what we think of as taste is really aromatic, and that's where much of the joy of eating -- and cooking -- comes from.

I can't taste herbs, for example. Not at all. I discovered this when Robyn asked me to bring her some cilantro, which was stored next to flat-leaf parsley. I couldn't be sure which was which without tasting, but neither tasted like anything at all.

Is that weird? It sure is.

Robyn says I'm still cooking just fine, but I'm not so sure. I have no way of knowing if I've added too much seasoning or not enough. I was briefly encouraged  by the thought of Beethoven writing symphonies after he went deaf, but...after all, he was Beethoven. I'm just a guy with a frying pan.

It's not just a matter of diminished pleasure, either. I have to be very cautious in the kitchen because I can't tell if milk has gone sour, or if the leftover tuna has turned fishy.

I've made peace with the electric stove because I'd never be able to detect a gas leak.

I've learned a couple of other important things about anosmia. For one, it's more common than I ever suspected. Certain medications, including some sold over the counter, can bring it on. For others, the cause is a mystery but the results no less severe.

It can also be quite debilitating as well as depressing. Some people lose interest in eating, and other become fearful of foods they can't taste.

So far, I'm OK.  I'm as hungry as ever but I'm making different food choices -- and not always for the better. The subtle joys of fine dining are lost on me. And by fine dining, I'm sad to include so many Armenian favorites.

I surprised Robyn with parsley, onions and eggs for Mother's Day breakfast. I know it smelled great because she told me so before she reached the kitchen. She assured me it tasted great, too, and I was glad.

I made enough for two, but there was plenty left over for her breakfast again the next day. I couldn't taste anything but the salt, so there was no point wasting something that good on me.

I settled for a bowl of instant grits.
Posted by Douglas Kalajian at 12:05:00 AM