What's for dinner? Sometimes, there's really no point in asking

My father ate the first restaurant meal of his life a day or so after arriving in America in 1928. This wasn't quite the extravagance it might seem, as the restauarant was owned by his father and a friend who would later become my other grandfather.

The fare was strictly hye cuisine. I don't think the place had a name, but it could have been called "Bulgur and" because the daily meal was always steaming-hot bulgur pilaf and whatever else Grandpa Bichakjian had decided to cook that day.

Lamb and beans, lamb and okra, lamb and . . . well, you get the idea. If you didn't like the day's special, you could always order something else, but only if you went to another restaurant.

Apparently, no one ever objected to this until my father arrived. Dad looked at his plate of bulgur and asked, "Could I see the menu?"

My father was still laughing at his own joke many years later when he told me the story. Grandpa's response in high-volume Kharpertsi made it clear he didn't appreciate his future son-in-law's sense of humor, which may explain why my parents didn't marry until several years after he was gone.

What brings this long-ago episode to mind is that Robyn and I were on an eating-out binge this summer while visiting family in New Jersey. For the most part, we had no fine-dining intentions. Restaurants were simply the easiest, quickest path to getting fed.

Unfortunately, way too many of our choices proved to be anything but easy or quick. Even when the food was fine, the service was often not good -- and I'm being kind.

I understand that summer brings lots of young, inexperienced servers. But our normally considerable patience was strained again and again as we ran into difficulty making simple orders.

One young fellow almost had me convinced we'd wandered into a Monty Python skit. Robyn asked him whether the fish in the fish tacos was broiled or fried.

"OK, so you'll split an order of fish tacos?" he replied.

No, she explained. We didn't want to split anything. She just wanted to know if the fish was broiled or fried.

"So you each want an order of fish tacos?"

Robyn told him to forget the tacos and just bring a broiled fish sandwich. I ordered one, too. The waiter repeated the order for us just to be sure he got it right.

"That's two broiled fish sandwiches," he said. "And a fish taco appetizer for each of you."

I won't bore you with the details, but yes -- things actually got worse from there.

Even when we got what we wanted, we were stranded again and again by servers who vanished from sight the moment we drained the last drop from our water glasses.

Occasionally, the service was so amateurish as to be humorous. One evening, I ordered pastitsio at a Greek diner. The server, who obviously wasn't Greek, asked, "What's that?"

Never mind that it was one of the night's specials. I patiently described the dish and she agreed to "ask the chef." She returned to inform me that "he's out of that thing you ordered but they have the other one -- you know, the mouse one."

I considering explaining all about moussaka, but I don't eat eggplant and she clearly wasn't interested anyway. I settled for a turkey sandwich.

Am I crazy in thinking that people who own restaurants should at least familiarize the wait staff with what they're serving?

Maybe Grandpa was right about menus after all. I'd certainly be happy any time with a plate of steaming-hot bulgur.
Posted by Douglas Kalajian at 12:05:00 AM 1 comment:

Learning to cook was easier than learning not to cook 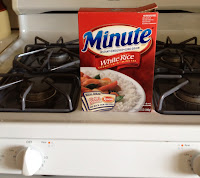 My introduction to cooking came early. As an only child, I spent a lot of time hanging out with Mom in the kitchen, watching her go through the rituals of meal preparation.

And rituals they were. Mom made everything the old-fashioned way, as she learned from her elders. Of course nearly everything she made was Armenian.

I thought watching her was great fun, especially as I got to taste everything. Our kitchen time became even more enjoyable when Mom started to show me how to cook. Mom  stressed that it was important to be self sufficient and not become the sort of man who needed a wife to feed him.

Luckily for me, I learned Mom's lessons. Better yet, I also got a wife who feeds me -- and quite well, thanks!

This arrangement has worked out well for years, as we've taken turns being the daily cook depending on whose schedule worked best. But life takes funny turns now and then that upset even the most reliable routine.

I've written before about my sudden loss of smell after a head injury a couple of years ago. It hasn't come back, and it most likely never will. This has played havoc with my taste, but that's another story. The problem that cropped up recently was much bigger.

Anosmia, as it's called, comes with a list of things to avoid because of potential danger. Among them is using gas appliances. I'd never know if there was a leak. This is not usually a problem for us because we have an electric stove.

The problem is that we took a trip to New Jersey to stay at Robyn's mother's house, which has a gas stove.

I happily stepped out of the kitchen, until Robyn's mother unfortunately was hospitalized for a week or so. Robyn and the rest of the family migrated to her sister's house, closer to the hospital. I stayed behind to finish a writing project on deadline.

That left me with no way to cook except with the microwave. I won't bore you with the details, but I filled up mostly on canned soup and Minute Rice mixed with madzoon.

Robyn returned to discover that I'd survived, although I'd been drinking sour milk -- another little sensation I can no longer detect.

I can't complain, as so many people have much bigger problems. I think Mom would be proud that I am still self-sufficient.

Happy Anniversary to Us!

We do apologize for our delay in posting. We're not in our usual location  and then the internet quit. Doug and I are celebrating our 35th wedding anniversary today, while assisting the family in my mother's recuperation and my niece's  upcoming wedding preparation.
Please bear with us if our postings are a bit sporadic from now until after Labor Day. Once we return to our Armenian Kitchen, we should be back on track.
P.S: Don't forget...this weekend is the big Armenian Bash in Asbury Park, NJ. It looks as though it's going to be great!
Posted by Robyn at 2:22:00 PM 8 comments:

It’s sweet-tart, simple to prepare, attractive, delicious, and healthy. What more can one ask of a refreshing citrus salad?
My version is an adaptation of the recipe, Narinchi Aghtsan, from Arto der Haroutunian’s “The Yogurt Cookbook”. The photo shows a single serving.


Garnishes: A dash of cinnamon, Zest of one orange
Directions:
1. Zest one of the oranges before slicing; set aside.
2. Using a serrated knife, pare the oranges, removing any seeds and as much of the white membrane (pith) as possible.
3. Slice the oranges into ¼ inch circles, and arrange them on a serving platter. Sprinkle the chopped nuts over the orange slices.
4. In a small bowl, mix together the yogurt, vanilla, powdered sugar, and lemon juice. If you prefer a thinner sauce, stir in a little bit of water at a time until the desired consistency is reached.
5. Drizzle the yogurt sauce over the orange slices; sprinkle with cinnamon and orange zest. Serve immediately as an accompaniment to poultry or fish, or on its own.


NOTE: For added interest, the original recipe suggests sprinkling 10 chopped, pitted dates onto the salad.
Posted by Robyn at 1:05:00 AM 1 comment: