Who cleans up The Kitchen? We do, and we hope you like what you see

You might notice a few enhancements in our page layout -- or you might not. They're subtle but worth a look.

First, we added a Google translation widget below the last post. Just select your language of choice and the entire blog is magically transformed.

We're guessing at least a few of you will enjoy the Armenian version. Of course, it's not a perfect translation -- but it's pretty impressive for a robot.

Next, our recipe list (to your right) was getting a bit long, so we shortened it up by turning it into a scrollable list. We've started a second alphabetized recipe list as well. While we were in scroll mode, we did the same to the video list.

We also tidied things up a bit by moving two standing features to tabs across the top of the page: The Armenian Pantry, which includes our suggestions for keeping your own kitchen well stocked, plus a guide to converting American measures into others that may be more familiar to readers in other parts of the world.

Just click on a tab to make the feature appear, and then click on the Home tab to get back to the main page.

We'll keep tinkering as we try to make everything here easier to find and to read. It takes us a while to make even small improvements, however, as we're not exactly Web gurus. All suggestions happily considered, especially if you can give us a hint about how to proceed.
Posted by Douglas Kalajian at 12:05:00 AM 2 comments:

I remember TV commercials years ago that featured supposedly hundred-plus-year-old people from the Caucuses whose longevity was said to be a result of eating yogurt.
I believed it was true because the people in the commercials looked like some of my elderly relatives, and all of them ate yogurt. I've become more skeptical since then as I've realized most of those folks weren't as old as I thought. In fact, many of the "old people" from my youth were younger than I am today.

So I wondered: Maybe yogurt just gives you wrinkles?

Now the American Heart Association has released a study showing that people who ate more yogurt were less likely to develop high blood pressure than people who ate less.

The study employed only low-fat yogurt, which leaves out anything my mother made. Researchers also stressed that they couldn't conclude that yogurt itself prevented high blood pressure but they cited it as one component of a healthy lifestyle.

And, of course, that healthy lifestyle has to include regular exercise.

I'm still hoping for a study that shows hot fudge sundaes are an essential part of a healthy lifestyle, and that frequent trips to the refrigerator count as regular exercise.

But until then we'll take cheer from the latest finding that a traditional building block of the Armenian diet is good for us.
Posted by Douglas Kalajian at 12:05:00 AM 3 comments:

If you’ve never been to the Catskill Mountains in upstate NY, it’s definitely worth a trip. The scenery is gorgeous, the air is fresh, and the water flows crystal clear.
Doug and I were fortunate to have been able to squeeze in a few days in Windham, NY, a popular winter ski attraction, to spend time with our daughter Mandy, her boyfriend, Ron, and Lucy, the beagle. The weather was gorgeous – sunny, warm, with just a hint of cool in the air.


Windham is full of surprises … for a small American town, it boasts a Greek diner, a Greek grocery store/luncheonette, and another Greek/Italian eatery all within a stone’s throw of one another.
Mandy took us to the local Greek-owned store to pick up a few treats for our stay. Among our purchases were tasty sesame cookies and a container of Kulfi Pistachio Cardamom ice cream. Man-oh- man was that ice cream terrific!

The ice cream is locally produced in Kingston, NY at Adirondack Creamery started by Paul Nasrami. The label reads: “The ice cream was named after Kulfi, a delicious frozen dessert from India made from a blend of spices, pistachios, and condensed milk. In India, it’s served after a hot, spicy meal to cool the palate.”
Never mind a hot, spicy meal, just give me a bowl of that to-die-for ice cream!


The Adirondack Creamery brand can only be found in certain stores in a limited area of the northeast, sorry to say.

When we got back to Florida, I had an uncontrollable craving for this stuff. Fortunately, I discovered a suitable substitute at our local Publix supermarket - pistachio frozen yogurt studded with pistachio pieces. After sprinkling a little ground cardamom on it, I closed my eyes, took a taste, and pretended I was eating the real McCoy. (It was pretty good, actually.) Another plus - the Publix frozen yogurt has much less fat and fewer calories than the Adirondack brand, and that’s a good thing! For an extra special touch, pour a little rose water on top. 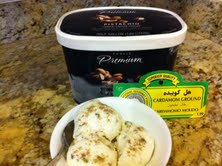 I was surprised to learn that my sister Dawn had never been to Costco. Luckily, I never leave home without my Costco membership card – you just never know when you’ll need to buy massive quantities of something.
I took her on a field trip through the massive store at the Jersey shore, with the knowledge that we’d need large amounts of paper products to get us through the summer. As we approached the produce department our eyes caught sight of the most beautiful-looking apricots outside of Armenia – or so I’ve been told. We simply had to buy them!

Not only were the apricots gorgeous, they were delicious, too.
We ate most of them as they were, but saved a few of the softer ones for cooking.


Dawn sliced the apricots, tossed them in a saucepan with a little honey, a squeeze of lemon juice and a dash of cinnamon and let everything cook gently until the apricots were tender and the juice became slightly syrupy. Served over a scoop of thick, plain yogurt and garnished with fresh mint from the garden, it was a perfect summertime treat!

A Wedding in Our Family

In the two months Doug and I were away, we covered a lot of territory driving from south Florida to NJ. We saw tons of family and friends, and tended to some very important family matters.

The highlight of our trip was assisting with, and attending our niece’s wedding which took place at St. Stepanos Armenian Church, Elberon, NJ. Perfect weather, a splendid reception (with Armenian music, of course), a stunning bride, handsome groom, and beautiful bridal party made for a most-glorious event.


As we were driving back to Florida the other day, our nephew called to announce that his wife had just given birth to their first child, a healthy boy. (My sister and brother-in-law became grandparents on a most-appropriate Hallmark occasion … Grandparent’s Day!)


We extend our love, congratulations and best wishes to them all!

The Last Supper of the Summer

My father-in-law, Andy Dabbakian, had a remarkable vision of the future that became reality. He did not leave that to chance.


His vision began to take shape in the 1950s and '60s, as Andy and Mary herded the kids into the car and headed for the Jersey shore.

Summers at the Van Hotel in Asbury Park yielded indelible memories of tavlou tournaments on the shady front porch and kef music floating on the summer breeze.

By the 1970s, however, kef time at the beach was over for most of us. The Van Hotel had burned down and other favorite Armenian hangouts were shuttered as our generation grew up and explored new vacation vistas. Andy, however, saw no reason to move on.

All Andy needed to keep the party going was his own shady porch. He found it attached to a once-glorious three-story house on the Shark River Inlet in Belmar. The place was old and a bit rickety but that wasn't important. As a machinist-turned-industrial arts teacher, he was hardly intimidated by a few loose boards or leaky pipes.

What mattered was that he could fish right from his backyard as he watched the boats come in from the sea.

What he saw when he looked at the house mattered even more: Andy could picture his children and their children filling the rooms and spilling out onto that glorious porch. This house would be the magnet that held them all together.

He planned to split his retirement time betwen fishing from the sea wall along the river out back and entertaining company on the front porch. He made up a sign to welcome any Armenian who dropped by: Hye Dune (Armenian house). He devoted the last years of his working life to nailing all the boards down tight and fixing most of the leaks while he waited for those grandchildren to be born.

Andy lived just long enough to rock his first grandchild on that porch. He never really got to retire. But his vision held true as the house became and remained common ground for three generations of very busy family members with widely diverse lives and interests. No matter how far we traveled or moved, we'd eventually all find ourselves back on that porch where Mary sat vigil for many years.

This summer, we were all drawn back to the beach for a happy event, the marriage of Mary and Andy's youngest grand-child.

Almost as soon as we arrived, I found some of Andy's old long-playing records in the hall closet. I went out and bought a phonograph and put it on the porch, because it was only right to fill the summer air with a little Artie Barsamian.

Our summer at the shore ended on Labor Day weekend. The only proper way to end our summer was with an all-Armenian dinner: Grilled lamb and vegetables, salad, and bulgur pilaf.
It was nothing fancy, just a comforting reminder of good times and of family come and gone. Afterward, we sat for a while on the porch, watching the boats come in from the sea.