The choir at St. David Armenian Church, Boca Raton, FL recently hosted their annual Armenian Christmas brunch after services. One of the featured menu items was Basimet – a cross between simit and chorag, according to my friend (and choir member) Louise Apoian, who was kind enough to share her family’s recipe. (Spellings vary, so one might find the recipe listed as ‘basimit’ or ‘Bah Simit’.) Louise's recipe was handed down from her aunt, Voco Kalafian, originally from Marsivan.

Baskets of basimet and platters of Armenian string cheese kept eager parishioners' hunger at bay until the brunch was actually served. Somewhat sweeter than chorag, the basimet, along with the slightly salty shreds of cheese, were a welcome treat for our taste buds and tummies!

Directions:
1. Melt butter (or margarine); allow to cool a bit.
2. Add sugar and milk to the melted butter; stir until sugar is dissolved. Pour mixture into a large bowl; beat in eggs.
3. In a separate bowl, add 5 cups of the sifted flour and the rest of the dry ingredients.
4. Slowly mix the dry ingredients into the bowl of wet ingredients, adding more of the flour as needed to create a dough that is not sticky and easy to handle.
5. Pinch off walnut-sized pieces of dough, roll into ropes, and twist. NOTE: The basimet can also be braided, made into S-shapes, circles, etc.
6. Place basimet pieces onto parchment-lined or lightly greased baking sheets. Brush tops with egg wash; sprinkle with sesame seeds if desired.
7. Bake in a preheated 350°F oven for 25 to 30 minutes, or until lightly golden brown.
Posted by Robyn at 1:00:00 AM No comments:


Thank goodness for email! My dear friend Sonia Tashjian reminded me that tomorrow is St. Sarkis Day. If you haven't baked kumba cake or made St. Sarkis Halva yet, you'd better drop everything and get busy!

If you don't know what I'm talking about, just click on the  recipe names above to return to the previously-posted stories and recipes related to the celebration of St. Sarkis and the Armenian version (well, almost) of Valentine’s Day!


Doug and I were in the mood for dolma but neither of us felt energetic enough to make it the traditional way.
Instead, Doug made meats balls with ground lamb and bulgur which he cooked in a skillet to brown, pouring-off any excess fat. We had tomatoes, zucchini and onion on hand, so he cut those into large pieces, threw them in a pot with canned tomato puree, seasonings, and the lamb meatballs. This was simmered for about 30 to 40 minutes, until everything was cooked just right. Naturally, this was served with plain thick yogurt.

Since there were only the two of us dining, we had enough for 2 complete meals and then some. With the meatballs devoured, we still had a sufficient amount of veggies and tomato base.
Being the creative sort, Doug transformed what was left into what we named “Dolma Soup”. He added quick-cooking barley, some Aleppo red pepper, a smidge more water and tomato paste, simmered the new creation for about 20 minutes – or until the barley was tender, and voila… Dolma Soup!

It's hard to imagine, but Armenians have come up with a new contribution to tastes of Lebanon: pomegranate wine.

The fruit itself is popular throughout the Near and Middle East, but it holds a special place in Armenian culture and lore—and, apparently, in our wine vats.

The Daily Star of Lebanon reports that the sweetly tart and distinctly Armenian drink made a debut splash at the Beirut Cooking Festival in November.

The wine was introduced at the festival by the Badguer Restaurant and Heritage Center, where pomegranate images adorn the dining room. Badguer founder Arpi Mangassarian explained the Armenian affinity for pomegranates by saying the fruit's presence "makes us feel there is balance and joy and prosperity."

The wine has since spread beyond the city's Armenian community, as others are drawn to its unique flavor. There aren't enough pomegranates grown locally to support wine making, so merchants are making overtures to importers.

Oddly, one likely source is America, where pomegranates have gained popularity along with a health-boosting reputation in recent years.

While Lebanese are clearly drawn to the taste of pomegranate wine by itself, there's still a question of how well its distinctly sweet flavor complements dishes in the country's varied cuisine.

“I think it will catch on in Lebanon, but the question is what can you consume it with?" said local wine expert Elie Maamari.  "Maybe cheese or dessert."
Posted by Douglas Kalajian at 12:05:00 AM No comments: 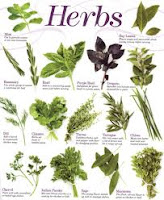 Catherine, a new reader of The Armenian Kitchen wrote asking for a common name  of a specialty herb she came across.


“While searching for Armenian Herbed Flatbread information I found your site and also a reference to a "specialty" herb used.  Can you give me the English or Latin name of this herb.  The special herb is called either [sic] carmantyuc  or kndzmdzuk.”

So, I did some hunting, came up empty-handed, and suggested to Catherine that I’d put this request on the website.

Catherine thought that was a great idea, and added:


“I am always interested in new-to-me culinary herbs and spices.  I live in the Phoenix, AZ area and because of that I can grow just about any herb or spice (with rare exceptions) here.  Regarding the herb in question, it may be a regional variety of a common family, like oregano, thyme or mint, so a 'hint' may help find it :-)”

There you have it, folks.

If anyone reading this knows an English or Latin name for carmantyuc or kndzmdzuk, please leave a comment, or email robyn@thearmeniankitchen.com.

Once we have an answer, I’ll post it for all to see. Thanks a bunch!


Doug, Mandy and I were invited to a pot-luck party during the holidays. My natural instinct was to make tabbouleh, but after having had a conversation about benefits of quinoa with a foodie friend, I decided to make a quinoa tabbouleh salad instead of the usual bulgur.

Here's some background information on quinoa from the book 'Food Lover's Companion':
Quinoa was known as 'the mother grain' to the ancient Incas of South America. Containing the eight essential amino acids, quinoa is considered a complete protein. It's higher in unsaturated fats and lower in carbohydrates than most grains, and provides a balanced source of vital nutrients.
Quinoa cooks in the same manner as rice, and expands to four times its original volume. It's very light and the flavor has been compared to couscous, meaning it's delicate - almost bland. Quinoa's uses are many - it can be served as a side dish, part of a main dish, in soups, salads, and even puddings.

I adapted a recipe from Epicureous.com using red quinoa which really made an impressive-looking, festive dish, if I do say so myself!

Directions:
1. In a saucepan, cook quinoa according to package directions. Remove saucepan from heat; let stand covered for 5 minutes. Fluff with fork.
2. Dressing preparation: While quinoa is cooking, whisk together the lemon juice, garlic, olive oil, salt and pepper.
3. Spread out quinoa on a large rimmed baking pan; let cool. Transfer to a large bowl; mix in 1/4 cup dressing. (Can be made 1 day ahead up to this point.) Cover remaining dressing and quinoa separately; chill.
4. Add cucumber, tomatoes, herbs, scallions, feta cheese and/or chick peas to bowl with quinoa; toss to coat. Season to taste with salt and pepper. Drizzle with remaining dressing; mix gently. Add more lemon juice, if desired.