Reader Karen emailed me a newsletter from the Seroonian Armenian Community Center, (outside of Philadelphia, PA.) which read:

“Come to the Seroonian Armenian Community Center on October 11th for dinner.  Dinner served will include a delicious Armenian pumpkin dish, oroogh, pilaf, salad and coconut cookies.  Dinner will be served at 7:30pm.” 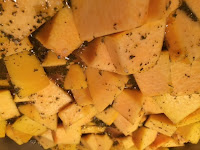 Karen wrote: “I just got this newsletter which mentions an Armenian pumpkin dish called "oroogh."  A quick google search didn't yield any results.  Have you heard of it?”

Since ‘oroogh’ was a recipe name that didn’t ring a bell, I searched through my cookbooks, and found 2 recipes (both spelled differently than in the newsletter), neither of which included pumpkin. Instead they seemed to be a type of lule kebab. (For the 'Oroogh' recipe, click here.)

As I suspected, the menu listed in the newsletter really meant that the ‘delicious Armenian pumpkin dish’ and ‘oroogh’ were two separate items.

So then came my question …. "Now that I have an idea of what oroogh is, what's the ‘delicious Armenian Pumpkin dish’ mentioned in the newsletter?"

To find out, I emailed the Seroonian Community Center and got an immediate response from Sevag Shirozian who told me the pumpkin  and oroogh recipes were his mother’s. He suggested I contact her directly - which I immediately did.

Anahid Shirozian was delighted to share her recipes with me, but I discovered she cooks ‘achkee chop’, meaning she eyeballs the ingredient amounts.
I took some liberties with the measurements when writing up her Lamb and Pumpkin Stew recipe, so if you try it, and it isn’t to your liking, the fault is mine!

In advance, cook about 2 lbs. of cubed stewing lamb (1 ½ to 2 inch cubes) in enough lightly salted water to cover the meat. Cook until the meat is tender, about 1 to 1 ½ hours. Strain the cooking liquid and reserve.
Cut a 3-lb. pumpkin in half, scoop out and discard the fibers, but save the seeds for roasting later on. Peel the pumpkin, and cut into 1 to 1 ½ inch cubes.
In a large pot, add about 3 to 4 cups reserved lamb broth (beef broth can be used). Stir in the pre-cooked lamb cubes, lemon juice to taste, crushed dried mint (to taste), 4 oz. tomato paste, 5 to 6 cloves of mashed garlic, seasonings of your choice. (Suggested seasonings: ground coriander, cumin, cardamom, salt, pepper – measured to taste.)

For some of The Armenian Kitchen's  pumpkin recipes, check out the list below:


Simply click on the recipe name, and you’ll be directed to the original story and recipe.
Have fun clicking, and happy pumpkin cooking!