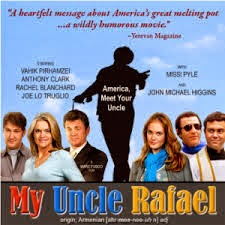 Movie Review by Douglas Kalajian
We're often the last to see films that everyone else has already forgotten. It's a bit embarrassing when the film in question is as huge as Iron Man or Avatar.

But I think we can be forgiven in the case of My UncleRafael, as it didn't seem to stop at a theater near us. In truth, it was not a national blockbuster, and that's the real shame.

In case you missed it, My Uncle Rafael is a 2012 comedy about a 70-something Armenian who gets cast in a reality TV show. He “adopts” a dysfunctional American family and restores both sanity and humor to their lives by dispensing Old Country-style wisdom and, alternately, slapping the father across the head.

The title character narrates the film as he tells his story to fellow students at an English-as-a-second-language class. The first clue that Rafael is a real Armenian comes when he is about to reveal to the class his dying mother's last wish but answers his cell phone instead.
The film is filled with that sort of small detail that struck me as hilarious as well as authentic, as it should be considering the story, as well as the character, are the creation of Vahik Pirhamzei, an Armenian actor and comedian from Iran.

Pirhamzei also plays Rafael's son Hamo, who runs a coffee shop while trying to break into the movie industry. Plus, as Uncle Rafael proudly announces to the class, Hamo also sells used cars “with no license!”

Some of the characters may be caricatures but it's all in fun and Uncle Rafael's advice is actually quite solid. It's also worth noting that the film is extremely professional: You'll recognize many of the actors, and the production values are excellent.
We found the movie by chance while searching through Amazon's streaming video collection. If you're Armenian, it's well worth seeking out. If you're not, I'd still be curious to know what you think. The mainstream reviews were not glowing, but for my money Vahik is at least as funny as Tyler Perry.

Perhaps odars (non Armenians) just didn't get the jokes? One of the running gags is about nazook, a flaky Armenian pastry resembling rugelach, which is served to everyone on every occasion whether they need cheering up or just filling up.

***
The constant reference to nazook in the movie got us thinking ... this was one recipe we hadn’t posted on The Armenian Kitchen.

Nazook is irresistible – especially when served with coffee, tea, or even a cup of hot chocolate.
Be warned: once you start eating nazook, it's hard to stop! If you happen to have any left, you’ll be happy to know that nazook freezes well.
Without further ado, here is The Armenian Kitchen's version of scrumptious, slightly sweet, buttery, flaky NAZOOK!

Directions for Dough:
1. Add yeast to the yogurt and mix together. Allow this to rest for 10 minutes.
2. In a large bowl, combine flour, salt and softened butter; mix with a pastry blender, fork or your hands until mixture is crumbly.
3.  To the flour mixture, add egg, vegetable oil, lemon juice and yeast-yogurt mixture, mixing well. Dough might be a bit sticky. If so, add a little more flour, but do not dry out the dough.

4. On a floured surface, gently knead the dough until it's no longer sticky. Form into a ball. (At this point, Armenians traditionally mark the top of the dough ball with a “+”, symbolizing a cross.)
5.  Wrap dough with plastic wrap. Refrigerate at least 4 hours, or overnight.

Filling Directions:
Mix the 1 cup of melted butter and flour until combined. Add sugar, chopped nuts (if using), apricots, raisins or currants (if using), vanilla, cardamom, and cinnamon. Stir until the mixture is smooth.

Preparation and Assembly Directions:
1. Preheat oven to 350°F.
2. Melt 3 tablespoons of butter and set aside.

4.  Roll each dough ball into a rectangle. Brush with melted butter.

6. Starting with the long side of the dough, slowly roll it into a long log shape, making sure the filling stays in place. Gently flatten with the log the palms of your hands.

7. With the seam-side of the log facing down, cut each log into 2” pieces using a serrated knife or a crinkle cutting tool.

8. Arrange each piece, seam-side down, on lightly greased – or – parchment-lined baking sheets, spacing the nazook at least 1 ½ inch apart from each other to allow for even baking.

9. Brush tops generously with the egg-yogurt glaze. Bake for 25-30 minutes, or until golden brown. Place each nazook piece on a wire rack to cool completely.