Have you ever tried to remove pits from cherries without using a cherry pitting tool? Well, it’s easier than you think. There are a couple of methods that do the trick, but be warned- the process is messy. You might want to wear latex (non-powdered) gloves to protect your manicure, and you’ll want to keep paper towels handy!

To Begin: Wash the cherries and pat away the excess moisture. Remove the stems. 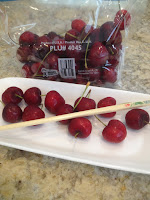 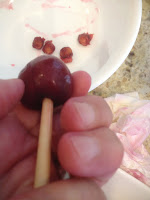 Method 1: This method works best on cherries that are a bit soft, but not mushy. If you happen to have one sturdy chop stick, it’s a snap. Poke the chopstick through the stem-end of the cherry, and push without hurting yourself! The pit will –eventually- pop through the other end. 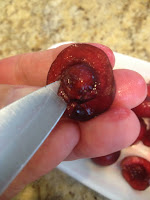 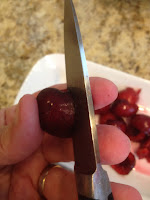 Method 2: Using a small paring knife, cut the cherry in half. Twist to separate the cherry into 2 pieces. Using the tip of the knife, carefully loosen the pit until it pops out. (Personally, I prefer this method.)

Now that you have the knack, and a bowlful of pitted cherries, here’s a simple, dessert to enjoy before cherry-season is over.

1.    Do Ahead: Combine the cherries and sugar in a bowl. Cover and refrigerate for several hours or overnight.

2.    Place a strainer over a bowl and drain the cherries. Do NOT discard the cherry syrup! Set the cherries aside.

3.    Place yogurt into a mixing bowl. Blend the cherry syrup into the yogurt. Stir in the honey and vanilla extract (or rosewater, if preferred).

4.    Set out 4 - 8 ounce tall glasses or parfait glasses. Spoon 1/4 cup yogurt into the bottom of each glass. Distribute an equal portion of cherries among the glasses. Sprinkle pistachios over the cherries. Repeat the layers (yogurt-cherries-pistachios) but do not sprinkle the top layer of pistachios until you’re ready to serve. Cover and chill for at least 1 hour. Just before serving, sprinkle the remaining chopped pistachios on the tops.

Note: The parfaits may be assembled and refrigerated one day before serving. BUT, do not sprinkle the top layer of pistachios until just before serving, as mentioned above.
Posted by Robyn Kalajian at 1:30:00 AM

Email ThisBlogThis!Share to TwitterShare to FacebookShare to Pinterest
Labels: cherry-yogurt parfait, how to remove pits from cherries, summer dessert