Please forgive our delay in posting. Doug and I have been on our summer mission -driving from Florida to upstate NY in preparation of our daughter’s wedding next month – and – to deliver our family’s shish kebab machine to the future Mr. and Mrs.

After driving through 7 states, we finally settled into our summer rental at the base of Windham Mountain where bear-sightings are commonplace.
The surroundings are absolutely stunning! In Florida we live at sea level - near sand and sea. Here the mountainous air is clean, crisp, and a bit thin with an altitude of over 1600 feet.

As lovely as the area is, we have noticed a severe lack of Armenian- Middle Eastern grocers. The nearest one is over an hour away - just outside of Albany.
Fortunately, Windham’s charming downtown has a rather decent Greek diner called Michael’s, serving spanakopita (spinach pie), chicken souvlaki, and roasted lamb – locally raised I might add. Nick, the owner, said he purchases and cooks the whole lamb, then breaks it down into serving portions. To prove his point, he brought to our table a roasted lamb ‘appetizer’ larger than most entrees. It was tender, tasty, and fall-off-the-bone delicious!

As a bonus, the local Greek Church (that’s right, there’s one at the top of a hill on the edge of town) will be having their food festival from August 12 -15. You know we’ll be stopping by!

Before leaving Florida, Doug disassembled our shish kebab machine (built by my dad almost 40 years ago) so it would fit in the trunk of our car. 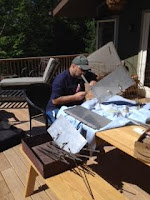 To prepare for the pre-wedding festivities, Doug and future son-in-law, Ron, worked feverishly to re-assemble and restore the machine for our ‘kebab night’ get-together before the BIG day.

After years of service on our Florida patio, Dad’s mechanical masterpiece has officially reached its new-generation destination.