Love lahmajoun? You can make you own, but don't try to steal ours!

For many of us in America, lahmajoun is our go-to model of Armenian food. 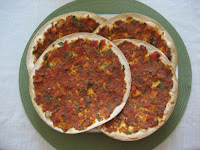 We love basturma, we devour pilaf, we argue about the thousand-and-one  ways to marinate lamb. But when it comes to time to show off our favorite cuisine to odars, we pop a few “Armenian pizzas” in the oven.

When it’s done right, the crust is soft enough to fold but still crunchy around the edges. The meat mixture picks up heat from the seasonings and sweetness from the chopped peppers. Add a squeeze of lemon for a bit of tang, then double the fun by sprinkling on the traditional mix of parsley and onion slices.

No plates or utensils are necessary. Just wrap it up and chew. It’s all the good stuff quite literally rolled into one, which is why everyone loves lahmajun.

Who knew that would turn out to be a problem of international proportions?

Our friend Lucine Kasbarian recently alerted us to news reports that lahmajoun's growing popularity has touched off the latest food fight between Armenia and Turkey.

Armenia, it turns out, has been promoting lahmajoun as a showcase delight from our national cuisine. Turkish television reacted indignantly when lahmajoun turned up on a couple of restaurant menus in Russia labeled as an Armenian specialty.

Turkey insists that lahmacun (Turkish spelling) is a Turkish creation. Several regions in Turkey claim its origin, including Gaziantep and Sanliurfa. Armenians have as much trouble swallowing that explanation as they do in recognizing the modernized names of Aintab and Urfa.

We could settle this now by simply declaring that lahmajun is Armenian, but that might be considered poor table manners by many of our friends and neighbors.

The book Armenian Food: Fact, Fiction and Folk Lore notes that lahmajoun was introduced to present-day Armenia (where it’s called lahmajo) in the 1960s by repatriates from Aleppo, Syria. We can presume their families brought the tradition to Syria as survivors from Dikranagerd and other cities in Western Armenia but we can’t be sure.

We do know that variations on lahmajoun are popular not only among Syrians but Lebanese, who call it lahm bi ajin. The name suggests Arabic origins: lahm (meat) and ayin (bread). (Thanks to scholar Vartan Matiossian for adding that footnote to the original story from Al-Monitor.)

Where does that leave us? It would be accurate to say it leaves me hungry for lahmajun. But that’s a bit too flip considering the serious implications of this controversy, as well as its historical context.

The common ingredients and similar names of so many dishes from the Balkans to the Middle East have long provoked curiosity as well as arguments among devotees. In recent years, those disputes have turned serious as various countries have sought legal validation for their claims.

There’s huge money at stake in Greece’s claim to feta cheese, for example, or the dispute between Lebanon and Israel over hummus. For Armenians, the stakes are often more emotional than financial—especially when the challenge comes from Turkey.

Consider that lahmajun may well have been created in an oven in Urfa, but that doesn’t mean it wasn’t an Armenian’s oven. Who could prove it now? The historic Armenian quarter of Urfa was reduced to rubble by German artillery under Ottoman command in 1915. The Armenians who lived there were destroyed along with their homes and hearths.

Lost culinary lore might seem a minor dimension of the Armenian Genocide, but it’s just one aspect of the immense cultural devastation that Armenians continue to suffer from. Survivors often escaped with little more than memories, and the memories of their familiar foods were among the most valuable.

Regardless of who invented lahmajoun, it was important to the Armenians who made the journey to and from Aleppo. I’ll remember them, and thank them, the next time I eat it.
Posted by Douglas Kalajian at 1:30:00 AM