Christine Datian continues to wow people with her culinary creativity. Another of her creations can be found on the California Raisin website – and – right here on The Armenian Kitchen!

Preheat oven to 400°F.  Puncture eggplants with a fork and place on a baking sheet.  Bake for 1 hour or until soft, turning occasionally.
Cool eggplant, peel, and scoop into a medium bowl.
In another bowl, toss together the bell peppers, onions, mint, raisins, garlic, balsamic vinegar, sugar, parsley, basil, salt, pepper, lemon juice and the olive oil.  Add the jalapeno pepper and cayenne or Aleppo pepper, and toss.  Pour this mixture over the eggplant, and toss to coat well.

Cover and refrigerate for 1-2 hours or overnight before serving.  Add more lemon juice or olive oil, if desired.  Garnish with chopped roasted walnuts before serving.

While Doug and I are entertaining out-of-town family, Christine Datian has kindly offered to share several of her recipes which are regularly featured in the ‘Recipe Corner’ of The Armenian Mirror-Spectator.
The first recipe we posted was her ‘Italian Pork Loin with Pasta and Vegetables’. Today we’re sharing her recipe for ‘Orange Pomegranate Lamb Shanks’, a hearty dish with complex flavors – a real crowd-pleaser!

We hope you’ll enjoy this, while we enjoy our family! See you soon!

Toss the lamb shanks in flour and lightly season with salt and pepper to coat on all sides.   In a large Dutch oven, heat 2-3 tablespoons of oil and brown lamb shanks on all sides; drain lamb shanks and set aside on a plate or tray.

Add the garlic, onions, celery, carrots, leeks, and bell pepper, and sauté for 5 minutes; return the lamb shanks to the Dutch oven and add the wine, broth,  tomatoes, pomegranate juice, pomegranate molasses, tomato paste, and honey, and bring to a boil, stirring until all ingredients are combined.

Remove pan from oven, discard bay leaves, and skim extra fat from the top of the pan.

Note: Pomegranate molasses may be found at most Middle Eastern stores and markets.
*Christine's recipes have been published in the Fresno Bee, Sunset and Cooking Light Magazines, and at http://www.thearmeniankitchen.com/

*For Christine's recipes that have been published in Sunset and Cooking Light Magazines, go to:  http://www.myrecipes.com/search/site/Datian
Posted by Robyn Kalajian at 1:30:00 AM No comments:

And now for something completely different, Christine Datian offers us her Italian Pork Loin with Pasta and Vegetables entrée which appeared in the December 24, 2016 edition of The Armenian Mirror-Spectator newspaper, pg. 16. Christine is always thinking of new and exciting ways to combine everyday ingredients into scrumptious meals.

This is definitely worth a try!

Lightly salt and pepper the pork pieces.  In a large pot, brown the pork in olive oil with the garlic; remove pork and the garlic from pot and set aside.  Add the onions, peppers, carrots, celery, and peas to the pot with remaining olive oil and butter, toss, and cook until the onions are caramelized.

Add the pork and garlic back to the pot with the cooked vegetables; add the remaining ingredients (except the parsley and wine) and stir; bring the sauce to a full boil, cover, and cook on medium-low heat for about 1 hour, stirring to ensure the sauce does not stick or burn.  Add the parsley and wine about 15 minutes before serving, and adjust seasonings; continue to cook uncovered for the remaining time.  Remove the bay leaf.

Boil the pasta to taste and drain.

Serve pasta in bowls and top with the sauce and choice of cheese, basil, red pepper flakes and toasted bread crumbs and pine nuts, if desired.

Note:  This recipe may be made in a large crock pot for all-day cooking.  Repeat steps 1 and 2, brown the pork with the garlic in olive oil, drain and set aside.  Add the vegetables and cook until onions are caramelized; add remaining ingredients (except the parsley and wine) to the crock pot and cook on low heat for 6 hours; stir occasionally until pork and vegetables are tender; add the parsley and wine 30 minutes before serving and adjust seasonings.

*Christine’s recipes have been published in the Fresno Bee, Sunset and
Cooking Light Magazines, and at http://www.thearmeniankitchen.com/

Winter came and went in one day in South Florida. It happened on Friday, December 30, 2016, when the temperature barely climbed into the mid - 60’s during the day and dipped into the low 50’s at night.
I hear what you’re saying …”She calls THAT winter?!?” Well, that’s how  our winters are. Believe me, I’ve shoveled enough snow during my years in New Jersey, so I delight in the south’s version of this season!

This ‘cold spell’ prompted me to bring out the big pot and make some stick-to-your-ribs soup. I prepared Kale and Pearl Barley Soup to satisfy our tummies and our souls.
Click the Read More link for the recipe 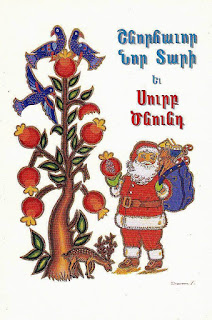 Another year has begun. May it bring
Peace and Joy into your Hearts and Homes.

The
Armenian Kitchen!
Posted by Robyn Kalajian at 1:00:00 AM No comments: