What do Anthony Bourdain and The Armenian Kitchen have in common? Read on! 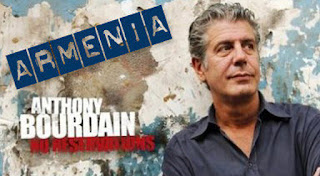 The Armenian community is all a-buzz with the knowledge that Chef Anthony Bourdain’s next 'Parts Unknown', which airs on Sunday, May 20th at 9 PM (ET/PT) on CNN, will feature Armenia! (Check your local listings for the exact time.)

I, too, am excited, because in early April, I was contacted by a member of explorepartsunknown.com, the website associated with Bourdain's TV show. I was asked if I’d be interested in having my lahmajoun recipe appear in their companion online publication, but I'd have to decide quickly as it was a time-sensitive offer.

Would I be interested?? Were they serious? OF COURSE I would. (Disclosure, I received a modest payment for this.)

My reaction went from shock, to elation, to sheer humility.

Before sharing my recipe which includes making dough from scratch, I thought it wise to make it – in my new kitchen – to make sure the measurements and technique were correct and easy to understand. Once I was sure the final product was just right, Bourdain’s editorial staff examined the wording of the directions, making suggestions to improve my explanation.

I guess the recipe was approved, because it appeared on the Exploration Parts Unknown website! (See my recipe below.)

If time is of the essence, make lahmajoun using the short-cut method.


I’ll bet you’re asking what Bourdain and The Armenian Kitchen have in common. Well, we’ve never met, but he – and we - have been to Armenia! And perhaps someday he’ll try my lahmajoun recipe.

Enjoy the program, and while you're at it, enjoy
some lahmajoun, too!

Preparation:
For the dough:
In a large mixing bowl, whisk together the flour and salt.

Dissolve the sugar and yeast in the lukewarm water. Stir well.
Add the liquid mixture to the flour and mix well with a wooden spoon or electric hand mixer. You can also use a stand mixer with the dough-hook attachment.
Add a little more warm water if necessary.

On a lightly floured work surface, knead the dough until smooth and elastic. (Note: If using a stand mixer with a dough hook, this step isn’t necessary.)

After the dough has risen, pat the dough, then divide it into 12 small, evenly sized balls.

Working with one ball of dough at a time, roll each ball into a thin 7-inch disc. Keep the rolled discs covered with plastic wrap while assembling to keep them from drying out.

For the topping:
If preparing the vegetables by hand, be sure to finely chop the onion, peppers, and parsley. Leave some parsley aside to chop for garnish. To save time, cut onion and peppers into chunks, then put them with the parsley and diced tomatoes in a food processor, using the metal S blade. DO NOT over process. Vegetables should still be a bit chunky, not pureed.
Using a sieve or strainer, squeeze out any excess liquid. (Note: Too much liquid in the topping will make the dough soggy.)

In a large bowl, combine the ground meat, tomato paste, seasonings, flour, and processed vegetables. Mix well. Cover and refrigerate until ready to use.

Place 3 rolled discs of dough on a parchment-lined or lightly oiled baking sheet. Make sure the discs don’t overlap.

Add topping in a thin, even layer, spreading it almost to the edge. (Note: An easy way to spread the topping evenly—and keep your hands clean—is to place about ¼ cup of the filling in the center of the rolled dough and spread it with the back of a spoon.)

Bake on the lower rack of the oven for about 6 minutes.

Move it to the upper rack and bake for another 6 minutes or until the meat topping has browned and the bottom and edges of the dough are golden.

Serve immediately, topped with thin slices of sweet onion, chopped parsley, and a squeeze of fresh lemon. Then fold and eat!

Freezing:
After baking, cool the lahmajouns completely on wire racks. Once cooled, stack the lahmajouns, separating them with plastic wrap or parchment paper. Place in plastic freezer bags, label, and seal tightly. They should keep nicely for about 1 month.

Reheating:
Heat oven to 350 F. (Note: There is no need to defrost the frozen lahmajouns.)
Line a baking sheet with parchment paper. Carefully separate the lahmajouns and remove any plastic or paper wrapping.
Stack the lahmajouns in pairs, meat sides facing each other, and place on prepared baking sheet.
Bake for about 5 to 7 minutes or until heated through.