Carolann Najarian is a woman of many talents – she is a retired physician, author, philanthropist, and now, a choreg baker.

Over the years, Carolann and I have communicated about this-and-that via The Armenian Kitchen.  Recently she wrote saying she wanted to try her hand at baking choreg. She said her mother used to make a choreg which was not too sweet, somewhat dry, a bit dense, and was formed into diamond shapes. She no longer had her mother’s recipe – a family favorite – and turned to my website hoping to find a recipe.

Her mother’s recipe sounded much like a recipe request I received ages ago for a Kharpetsi-style chorag recipe called Koolunja, a word she wasn’t familiar with. After reaching out to my readers about Koolunja, I never had any responses. My research provided a clue about koolunja (aka kalonji) and discovered it means 'black seeds'.


Since black seeds are often an ingredient in chorag recipes, I came to the conclusion that “koolunja” simply refers to these seeds and is not really a recipe name. 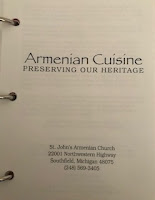 For Carolann's future use, I sent her a recipe for ‘Koolenja’ by Agnes Carman Hovsepian, from the cookbook, 'Armenian Cuisine - Preserving Our Heritage', St. John's Armenian Church, Southfield, Michigan.
(Carolann plans to try the Koolunja recipe and let me know how it turns out. This will be a separate post.)

NOTE: Charles Kasbarian (aka C.K. Garabed and Uncle Garabed, columnist in The Armenian Weekly), provided me with additional  information about Koolunja:


According to C.K., “the black seeds that are referred to as koolunja and black caraway seeds are also referred to as sevakundig (sev hundig) and nigella.”

Carolann got down to work and sent me her whole wheat choreg report:
“I did make the half whole wheat/ half all-purpose flour chorag and it is very good. I used the same recipe (almost) that I used last time simply because I had made twice before and felt comfortable with it. It is from Rachel and Nonny Hogrogian's cookbook, ‘The Armenian Cookbook’.” Her recipe, an adaptation of Rachel Hogrogian’s Choreg recipe, follows.
Carolann Najarian’s Whole Wheat Choreg Recipe
Yield: 25 pieces


C.K.’s daughter Lucine, author, writer, illustrator, sent me two vital links  regarding Mahlab:
#1. What Mahlab is: Click here.
#2. If you- or anyone you know – is/are allergic to almonds, you’ll definitely want to avoid mahlab. Please click here to find out why!

Directions:
In a large mixing bowl, combine both flours, salt, sugar, ground mahlab, ground anise, and black seeds. Blend well. Make a well in the center of the dry ingredients and pour in the yeast, 3 eggs, melted butter and warm milk. Blend mixture by hand until a dough is formed.

Knead the dough in the mixing bowl. When the dough stops sticking to the bowl, stop kneading immediately. Do not coat the bowl or dough with oil. Cover the bowl with parchment paper and a clean towel; place it into a warm oven heated to 150°F. Turn off the oven; allow dough to rise until doubled in size - about 2 hours.

Punch dough and place it on the work surface. Flatten dough with your hands patting it down to about 3/4 inch thickness. Cut into squares, triangles, or diamond shapes. Alternately, take a handful of dough, roll it into a rope about 1 ¼” thick. Cut rope into 9” pieces; fold each piece in half and twist it once.

Many thanks, Carolann, for your enthusiastic participation in this project!