Our Super Bowl Menu included Basterma - Cheese Rolls and Manteh. What was on your menu?

It’s been almost one year since Doug and I moved to South Carolina. Since then we’ve started to visit some of the state's charming cities.

Our first stop was to our state capital, Columbia, a pretty, not-overly large city with museums, fine and casual dining, an impressive capitol building, and lots of outdoor activities.
Next was a trip to Spartanburg where BMW has an ultra-enormous plant to build their cars - and - a small, yet impressive car museum. (Guess whose idea it was to go there!)
Downside of Spartanburg: In my opinion, not a great foodie destination.

Our latest journey took us to Charleston on the east coast. For years we’d drive past the exit on I-95, meaning to visit, but never quite made it. Of the three cities we’ve visited so far, we like Charleston the best. There’s so much to see and do, and the dining is pretty amazing!

The day we arrived (Super Bowl Sunday), we took a stroll along King Street, known as their shopping district. There are big name stores as well as plenty of small businesses. As we wandered, we chuckled when we noticed that a few restaurants were closed due to the Super Bowl.

Luckily, our dinner destination, Leyla, was open and ready to please. It’s family owned and operated, and they put their hearts and souls into their food preparation and service.

The hot appetizers were wonderful. Their basterma-cheese rolls take the usual cheese boreg recipe to a higher level. The menu described it as such: Thin flour dough, stuffed with combination cheese and basterma (beef proscuitto) then fried to golden perfection.
Just to make sure the filling really did contain basterma rather than ‘beef prosciutto’, I asked the owner’s wife what brand of basterma they use. Her response – Ohanyan's. I was OK with that! 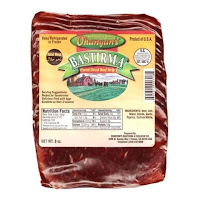 (Note to self: The next time I make cheese boregs, add some basterma!)

The manteh (remember, spelling varies) was delicious, too. (Their description: Thin flour dough boats filled with seasoned meat, fried and served with yogurt garlic sauce and garnished with cumin, paprika and roasted pine nuts.) I asked why it was fried rather than baked and was told it was due to time constraints. When they’re busy, they fry the manteh rather than bake it. Again, I couldn’t argue, as the manteh was tasty, crisp, and was served with a dip of minty yogurt.

Dinner selections were chicken shawarma and vegetables, and lule kebab with rice.
Dessert - cheese knafe with pistachio ice cream on the side! (Sorry, no other pictures, as we gobbled everything without thinking!)

We’re definitely re-visiting Charleston, and, yes, we’ll be going to Leyla again, but not on a Monday or Tuesday, as they are closed on those days.