Aram, our recent house guest, is on a gluten-free diet. While he and his wife Tricia were here, Aram and I experimented making a gluten-free crust for lahmajoun and gluten free simit. (Coming soon in a separate post.) 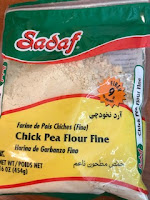 After Aram and Tricia left for home, I purchased the Sadaf brand of chickpea flour with the idea of making the gluten-free cookie recipe on the back of the product’s bag and sharing the recipe with Aram.


I followed the recipe to a “T” through step #3. Once the two hours were up, I tried to lift the ball of dough out of the bowl, but it crumbled into a heap!


There was NO way I would be able to roll the dough as suggested in step #4.

What to do? I scooped up the crumbles and put them into a mixing bowl. Put about 1+ Tbsp. water and 2 Tbsp. of well-stirred tahini into the dry, crumbly mass. I gently mixed it together with my hands, making sure all was combined. The consistency was similar to a thick brownie batter.


Using an 8-inch glass pie pan which I lightly greased, I pressed the mixture into the pan. I used the back of a fork to create a pattern on the surface and added a few pistachio nuts as a garnish.
The dessert baked for about 25 minutes at 350°F.
The dessert had to cool completely before serving. Note: The longer it sat, the easier it was to slice and serve.
How did it taste? If you’ve ever eaten candy-coated chick peas, that should give you an idea. It was sweet, without being too sweet, with a hint of cardamom and tahini.
It was actually pretty good, especially with a cup of coffee!