Back in December we were pleased to see a recipe for ‘Armenian Blistered Eggplant Dip’ by Dayana Sarkisova in the Washington Post. Why did this make us happy? Because the recipe, also known as ‘Baba Ghanoush’ or ‘Moutabal’,  is one that we love. We also enjoy the grilled zucchini version of this, Mama Ghanoush.
By the way, this is perfect for Lent, which begins on Monday, February 24th this year.

(Making this recipe a day in advance will allow the flavors to develop.)
Yield: about 1 ½ to 2 cups

Rinse eggplant; pat dry. Using a paring knife or fork, pierce the eggplant all around.
Wrap 2 large, unpeeled garlic cloves in foil. Place pierced eggplant and wrapped garlic on prepared baking sheet. Roast for about 30-35 minutes or until eggplant and garlic are soft. To test for softness, insert the fork or paring knife into the eggplant. It should slide in without any resistance.

Using tongs, place eggplant on a wire rack to cool. Remove garlic from foil; gently squeeze softened garlic into a bowl and mash with a fork. Set garlic aside until ready to add.
Once eggplant is cool enough to handle, put it on a cutting board, pull away the skin and discard. Roughly chop the eggplant, then place it in a mixing bowl. Add the remaining ingredients mixing to combine.

To make a semi-smooth mixture, puree it in a food processor for a few seconds, but don’t over-do it.

Return mixture to the mixing bowl to adjust seasonings, if necessary.

To Serve: Place eggplant dip into a serving bowl. Garnish with chopped parsley or cilantro. Add a sprinkling of sumac and a drizzle of olive oil, if desired.

Time is Running Out! The offer to win your very own copy of ‘The Vegan Armenian Kitchen Cookbook’ ends soon!

A few weeks ago, Lena Tashjian and I posted articles about her new cookbook, ‘The Vegan Armenian Kitchen Cookbook’, which will be available in time for Lent. 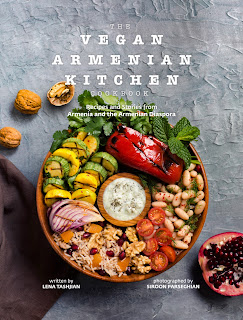 If you haven’t already done so, we want to remind you to enter by Friday, January 31st following the instructions below.
Thanks, and Good Luck!

How to enter ‘The Vegan Armenian Kitchen Cookbook’ give-away:
(Only residents of the United States and Canada are eligible for this give-away.)

Khash: A Brief History -and Recipe to Try

‘A Brief History of Khash, Armenia’s Love-It-or-Hate-It Hangover Cure’ a story by Benjamin Kemper, and ‘Khash’, a recipe by Samvel Hovhannisyan originally appeared in Smithsonianmag.com about two years ago.
An abbreviated version of Mr. Kemper’s article, and, Mr. Hovhannisyan’s full recipe recently appeared in the online newspaper, The Armenian Mirror Spectator’s - Recipe Corner - thanks to Christine Vartanian-Datian. She, in turn, asked if I would share these on The Armenian Kitchen.


Enjoy the full article, and, if you’re daring enough, try Mr. Hovhannisyan’s khash recipe (see below) the next time you feel a hang-over coming on!

(Perhaps after Super Bowl Sunday??)
*****
Armenian Khash (or pacha) is a traditional winter dish, and one of the tastiest Armenian national dishes. This distinctive soup has an interesting tradition of preparation, and also a unique way of eating․

“A recipe for the Armenian soup called khash, at its most basic, goes something like this: Simmer cows’ hooves overnight. Serve.”

“Even the soup’s preparation is a production. The hooves must be plucked meticulously of any stray hairs and soaked in water for a day to remove impurities and funky odors. Then comes the cooking, an eight-hour simmer requiring hourly check-ins, lest the pot dry out. Khash-fueled breakfasts start around 9 a.m., which means cooks often literally lose sleep over the dish. “It’s a sacrifice,” said Samvel Hovhannisyan. “That’s why the toast to the cook is so important.” Hovhannisyan is the owner of Bureaucrat Café and Bookstore in Yerevan.

“For the broth to remain white and nearly transparent, the mark of a well-made khash, Armenian cooks don’t add salt to the pot during cooking: It’s up to the end user how much salt and other traditional flavorings to mix into the finished soup. Armenians are known to add up to eight cloves’ worth of garlic to each portion. Two types of lavash, or flatbread, always grace the table: dry, for crumbling into the broth, and fresh, for draping over the bowl to seal in the heat. Purists, like Hovhannisyan, insist that fresh lavash — torn and folded for easy scooping — is the only acceptable utensil for eating khash, and that vodka, never wine or beer, is its only worthy sidekick.”

“Though khash is an ancient dish, mentioned in medieval Armenian texts as early as the 12th century, the ceremonial fanfare surrounding it appears to be a relatively recent phenomenon. ‘We haven’t found evidence that today’s khash rituals—the vodka drinking, the three toasts, the specific serving elements—were widespread or well-established before the Soviets arrived,’ said Ruzanna Tsaturyan, a researcher for Armenia’s National Academy of Sciences at the Institute of Archaeology and Ethnography, adding that the few historical references that do exist characterize khash as wedding food.”


“That khash culture stems from ancient wedding traditions is one of many theories—and folktales. According to Hovhannisyan, some locals recount that a king popularized the dish after tasting it on a junket through the countryside, while others contend that the poor created khash out of necessity as the better cuts of meat were reserved for the rich.”

On the morning of the day prior to your khash feast, place the trotters in a large bowl and cover with water. Refrigerate at least 10 and up to 48 hours, changing water every two hours or so for the first 10 hours.

Place trotters in a heavy-bottomed pot and cover with 2 inches of water. Bring to boil over high heat. Regulate heat to maintain a simmer, and cook, uncovered, for 40 minutes.

Drain water, return trotters to the pot, and cover with 2 inches of fresh water. Bring to boil over high heat, reduce to simmer, and cook, uncovered, for 6 to 8 hours, topping up water every hour or two, until trotters are soft and tender.

Pour 2 cups of hot broth into the mortar or small bowl with the garlic and stir to combine.

Khash can be made ahead through step three and refrigerated for up to four days. To reheat, simmer for 20 minutes.

A Special Guest Post: A New Holiday, or any-time-of-year, Cocktail: The Armenian Manhattan!

My name is Ron, I’m the son-in-law of the authors of this blog. My other qualifications for receiving this special assignment include that I’m arguably Armenian – Armenian By Choice, the best kind of Armenian I’ve been told – and that I live in Manhattan. Well, Upper Manhattan, but close enough.

Mandy and I were visiting Doug and Robyn this past holiday season.
A few days before Christmas, my in-laws hosted a neighborhood gathering. Thanks to Robyn it was homemade Armenian Everything – lule kebab, lahmajoun, yalanchi, sarma gurgood, zucchini 'caviar' (See this recipe at the bottom of the page.), basturma, string cheese, boregs and kadaif, to name a few. There was even a priest from the nearby Armenian church in attendance.


When Doug invited me to bartend, I said Yes! But he mentioned a small challenge: An enthusiast of Manhattans (as in the cocktails) would be in attendance, so I needed to ask Google for a refresher on how to make one. Then I needed to make it Armenian, hence, The Armenian Manhattan.

Otherwise, the concept of Robyn’s Armenian Everything shindig would all fall apart at the bar.


Sitting atop Doug’s well-fortified, swing-open bar was a big bottle of Ararat brandy, “the legendary Armenian brandy since 1887”. I remembered some barkeeps use brandy as the secondary booze in a Manhattan, in lieu of sweet vermouth. Well, Merry Christmas!, the ‘Armenian twist’ problem was solved!

The Manhattan enthusiast – and others – lined up. I’m happy to report this libation (so popular it was made in larger batches) went down smoothly. Second rounds were served. Some guests even had thirds. Or was that just me?

Recipe for ‘The Armenian Manhattan’ by an 'A-B-C'

Start by adding a cup of ice to a cocktail shaker. Slowly add the Bourbon, Brandy, Cherry Juice and dashes of Bitters.

Gently shake the mixture for 15 to 30 seconds.

Pour about 3 ounces (or 2 fingers) of the mixture into each glass. Garnish each glass by adding 3 Bourbon Cherries.

Directions:
Place shredded zucchinis in a large, clean, kitchen towel. Roll up the towel and squeeze out the excess liquid.

In a large, heavy pot, heat olive oil on medium. Add strained zucchinis, onions and carrots; sauté for 15 minutes, stirring occasionally. Next, add diced tomatoes, tomato (or red pepper) paste, garlic, bay leaves, sugar and salt and pepper, to taste.
Reduce heat to low and simmer for 30 minutes, stirring occasionally. Mixture should not be watery. If it is, continue to cook until almost all of the excess liquid is evaporated.
Remove and discard bay leaves.

Place mixture in a bowl and allow to cool slightly. Add the mixture into a blender or food processor. (You might have to do this in batches). Puree until a thick, creamy texture is achieved.

To serve: Spread zucchini caviar on toasted baguettes, or, serve with your favorite crackers, chips, bread – such as pita or lavash - and/or vegetable sticks.

Coming Soon – 'The Vegan Armenian Kitchen Cookbook' – and - a chance to win your very own copy!

My first introduction to Lena (Tachdjian) Tashjian was back in December of 2013 via an article that appeared in The Armenian Weekly.

At that time, Lena shared with The Armenian Kitchen a recipe for Basoots Dolma (spelling varies!) – a truly vegan dish. We’ve kept in touch over the years, and now I’m thrilled to introduce to you, Lena's brand-new, soon-to-be-released, 'The Vegan Armenian Kitchen Cookbook' – and just in time for Lent, too!
Lena explained to me how the Cookbook project began:

'The Vegan Armenian Kitchen Cookbook' is a collaborative project between Lena, the author, and Siroon Parseghian, a photographer and creative director she met in Armenia eight years ago.

The cookbook focuses on both local and Diasporan Armenian cuisine, and shares stories behind the dishes, and traditions surrounding them. It also includes some food idioms, holiday planning, and menu pairing suggestions.

The book will be released this month, January, 2020, just in time for Lent, and can be ordered on this website, where recipes, videos, and more will be shared. While the majority of recipes found in the cookbook are naturally plant-based or Lenten, Lena has veganized a few classics, including khash!


How to enter 'The Vegan Armenian Kitchen Cookbook' give-away: