Five years have zipped by since we visited Armenia and reveled in every conceivable style of Armenian food, feasting our way from soup to nuts with a delicious detour for basturma pizza. 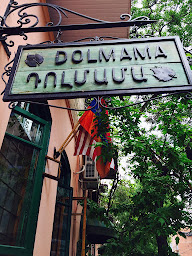 Every day began at our hotel with a buffet  of fresh fruit, cheeses, breads and meats. That's plural in spades, expressing variety as well as bounty.

There were plenty of choices familiar to visitors like us with roots in Western Armenia (dolma, kufte, kebabs), and plenty of less-familiar treats (spas, khinkali, pelmeni) that are everyday fare in Haiastan.

It was quite wonderful except for the occasional miscue you'd find in any city. The favorable exchange rate was an added treat: the bill for an evening-long banquet for five arrived with many zeroes that translated to about $50 U.S.

We flew home stuffed but certain we’d return for a second
course before long. As we should have known, nothing about Armenians is ever certain.

First we got diverted by other travel over the next year or two. Then we put all excursions on hold after our exasperation with hurricanes prompted us to move from coastal Florida to inland South Carolina.

We were just getting settled when the people of Armenia startled the world by swiftly executing their glorious “velvet” revolution. We cheered their triumph but decided we’d wait to be certain the new order would remain orderly before we booked our next flight to Yerevan.

Unfortunately, we’ve since been deterred by events that have delivered continuing sadness to a people who’ve experienced more than their share.

Turmoil in the Middle East has ushered in waves of refugees displaced from historic Armenian communities in Syria and Lebanon, while tiny Armenia’s economy and health care systems were already reeling from the COVID 19 crisis.

All we can do at this distance is offer compassion and support in every way except the one we’d like most.

Even when the virus veil lifts for most folks, I’m not sure how eager we’ll be to spend more than half a day airborne in an aluminum cocoon breathing recycled air.

Regardless of when or even whether we return, we have great memories and lots of photos that we’re happy to share. And of course, we’ve had a bit of practice making Armenian food at home, as well as making any food we eat Armenian.

In fact, Robyn’s making pizza for dinner tonight. I don't know what other toppings she has in store, but I'm certain there will be plenty of basturma.

Post script: When I'm wrong, I'm wrong. We've just finished dinner, and there was no basturma on my pizza.

I had to settle for Armenian sausage (soujuk). How could I possibly complain?
Posted by Douglas Kalajian at 10:30:00 AM